HELLO! e-Fatlady would love to hear your anecdotes (the good, bad, funny, and ugly) about navigating, as a fat person, your way through a thin world.

If you are a thin person living with a fat person, how does that affect your day-to-day life?

I posted the above over a year ago, on July 7, 2004, at 11:27 p.m.; I was in a different place back then, and wished to be anonymous. I no longer feel that way. I'm not going to post anything I wouldn't want my family and friends to see; as a result, I have changed my profile to reflect my openness. I have no desire to hide in cyberspace.

As I enter into late middle age, I have embarked on a new journey, which began on August 4, 2005--only I didn't realize it at the time.

I thought I was beginning "another diet." I had just returned from a year's stay in Skopje, Macedonia, where the food tends to be fatty, both good (olive oil) and bad (animal) fat. I, of course, gained weight, about 15 pounds, maybe more. Macedonia, a developing country, has many of the same conveniences that we do, except not as much variety. Diet foods are almost unheard of, so if one wants to cook low fat, we're talking about "from scratch." No Chef Lean Cuisine or Healthy Choice, though Coke Light and artificial sweetners (in liquid--probably the same cyclamates banned years ago in the U.S.--and pill form) are readily available. Like the good perennial dieter, I
used these products, even as I stuffed myself on pizza, fries, and Big Macs--yes, there are at least three McDonald's franchises in Skopje alone.

I didn't bother to cook much; I hate to cook. I remain fundamentally opposed to spending two hours preparing a meal that takes 10-15 minutes to consume. So my husband Jerry and I ate out a lot--very inexpensive in Skopje, about $7.00-$8.00 at the local pizzeria for both of us, including shots of Mastika (licorice-flavored white lightning) or Rakjia (yellow or white lightning). Even my skinny husband piled on a few pounds, which he has quickly shed. Men! 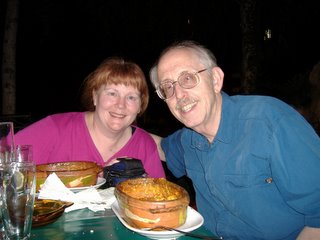 During my time in Macedonia, I didn't realize the significance of this following observation: that despite their high fat diet, Macedonians tend to be thin. Obesity is rare. Morbid obesity is unheard of--on the street, I saw one Macedonian who might be considered obese, and that was a stretch.

I must admit, I sometimes felt a little out of place, but I still enjoyed my time there, writing, visiting friends, shopping, walking, traveling (Rome and Athens!), and going out. Surprisingly, I experienced very little blatant discrimination against me because of my size--I can probably count on one hand the times I felt belittled because of the way I look. Most of my self-consciousness was self generated.

Fat prejudice is much worse in the U.S.; even as our culture gets fatter, discrimination against the overweight is heaped higher, evidenced by insensitive talk show hosts and a domestic airline that will remain unnamed. But that's another issue to be explored in another entry.

The truth is, weight regulation is a complex biological process that goes beyond the simplistic input/output formula touted by some righteous thin people for whom weight regulation and appetite control are unconscious processes. Even scientists and researchers are baffled why some people hang onto weight, while others slough it off effortlessly, as evidenced by a lack of diet aids that (1) truly work, (2) are safe, (3) don't involve risky major surgery.

My difficulty has always been appetite control. When I was 10, my grandmother told me, "You eat like a man." She was right; I could eat any teenage boy under the table. Set me loose at a buffet, and I'd go back to the groaning table three or four times. I just couldn't fill up--not until I was so stuffed that my stomach hurt.

Even so, as a kid, I was only slightly overweight. To this day, I'm convinced that if my grandparents (who raised me) had left me alone and not stuck me on myriad diets, my appetite and weight might have evened out, though I'll never know for sure. But I'm finished playing the blame game. My family did what they felt was best for me--

So why are most Macedonians thin? I have arrived at some conclusions:

Number 10 demonstrates that, over time, Macedonia and other former communist countries will pick up many of our bad food and dieting habits, but in 2004 and 2005, they still relate to food in a fairly healthy manner.

So why didn't I come home thinner instead of fatter?

The simple answer: Jerry and I brought our American culture with us. While we tried, in public, to "blend" in, at home we retained our old habits. We ate our main meal at six or seven, and I didn't change any of my eating habits--I even developed a few other bad habits, such as developing a taste for cappuccinos with whipped cream, and not as a substitute for meals. The food in restaurants was tasty and fatty, and we ate out a lot.

A different story in 1988-89, another year in Macedonia--then part of Yugoslavia--and I did return home 15 pounds lighter. But it was a different place then, food choices at the market limited to what was in season, sometimes the shelves bare--and Tito's ghost still very evident. No internet, no computer, no CNN: we were truly isolated back then. Five Americans lived in Skopje, we making up 40% of the American population. We truly lived on the Yugoslav economy, which means that, in the cold winter months, we ate a lot dishes made from dried beans, pasta, cabbage, leeks, tomato paste, tuna, and rice--it's really difficult to gain weight on such fare. Junk food was rare, and what existed tasted terrible, at least to the spoiled Western palate. Going out was inexpensive, but pizzerias were rare and not that that great. The main restaurant staple was steak, and you had to ask the server "to hold the fried egg on top." I'm not a big steak fan. They didn't even serve cappuccino back then--just Turkish coffee, which consists of a brew boiled directly in coffee grounds, an acquired taste. It was just easier not to eat as much.

Back to August 4. I had been back in the states about a month, just returned from a two-week trip to Sioux City, Iowa, to visit family. I felt depressed, uncomfortable, and bloated, having indulged even beyond the previous 10 months. Pigged out. So I went on a diet, the same old song of my life, got out all the dusty diet books and began reading about the ways I'd need deprive myself for the next six or seven months.

Ho-hum. For about three weeks, I stuck to my plan. But then the cravings came, and on August 27, I caved, and binged. It wasn't an all-out binge, but, in my mind, it was a failure, close to a moral lapse.

I would have to start over.

Then something amazing happened, an epiphany.

My question: In the long run, do diets really work? I would like to hear some success and horror stories.

My original invitation still stands; you are still welcome to post your stories.