Cherokee, Iowa: a memoir and a chunky teenager 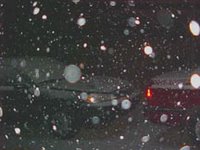 I just took this pic a few minutes ago. My camera isn't very good for night pics, but I wanted to capture this first major storm of the season. I'll try to get a day shot tomorrow and post it then. I live in South Central Pennsylvania, so we'll see if the actual storm matches the hype from the meteorologist.

Speaking of wintertime events: On February 19, 1969, I was involuntarily committed to Cherokee Mental Health Institute, where I was held for two months.

I am currently writing a memoir about that time, and in the near future, I plan to open a new blog and post select pieces of the book. But it has never been my intention for that story to migrate over to this blog. I have always felt that these were two separate events and never quite got the connection between my struggles with weight and the consequences of my "Better Living Through Chemistry" era.

Back track: After I graduated (1968) from high school, I left Iowa and split for California and embraced the pharmaceutical delights of the day: LSD, marijuana, and speed (bennies). My boyfriend at the time was a drug dealer and just plain bad news.

To make a long story very short, my grandparents talked me going back to Iowa "to get my head back on straight."

I agreed only because I wanted to be closer to Pennsylvania, where another young man lived (he later became the father of my only child, my husband, and then ex-husband). Somehow, the flawed logic of an 18-year-old girl started off a chain of complicated events that resulted in Woodbury County, Iowa, deeming me "mentally incompetent."

I probably wouldn't have even remembered much of this time--it was rather traumatic, and I certainly spent 30+ years trying to hide that aspect of my life--but I, a confirmed packrat, kept the 90+ letters that Jeff and I exchanged during that time. The letters offer a lens into that fascinating time in history, though my heels were pretty much cooled while I was incarcerated.

At that time, I was close to normal weight, and I actually lost a few pounds while I was at Cherokee--the food was unspeakably dreadful, such delights like green scrambled eggs having the consistency of a water-logged sponge. It's a wonder I didn't die of food poisoning.

As I combed through my letters, I was struck by my constant references to food: meals I had to eat, meals I wished I could have eaten, noshing evening snacks on the ward, elaborate descriptions of Sunday dinners. I don't actually remember any of this obsession with food, but the letters offer irrefutable proof.

The most interesting connection comes from my hospital records, which I requested in 2002, in the opening sentence of my mental evaluation:

Miss Semple, a slightly overweight 18 year old female, was cooperative, pleasant, rather cheerful and somewhat adolescent in manner. She wore poorly applied eye makeup which gave her a slightly unusual appearance. She responded quickly and with fairly good efficiency. Some manifest anxiety was noted in her tendency to repeat questions before answering.

The fact of my weight carried (excuse the pun) the weight of my evaluation, even over my "poorly applied eye makeup" (I had been crying), obvious adolescence (well, duh), and "fairly good efficiency" (scared shitless, convinced I was insane, and trying not to be "found out").

Talk about a major strike against me.

Fortunately, I was eventually able to con my way out of the institution. In the end, my doctor proved to be a good guy, funny, and compassionate. But he was a product of a culture that defined women by their bodily shape, and I was not only a druggie, but I had made the egregious blunder of being chunky (opposed to being Twiggy-esque, a popular stick-thin model).
I don't think that attitude has changed too much.
Posted by Jennifer at 2:59 AM