Instant Messenger: From America to Macedonia 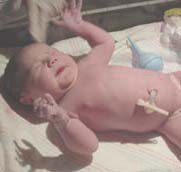 by
Eric Nicholas Brown and Jennifer Semple Siegel
(With love: to Rhia Alden Brown, b. December 3, 2004)

Son: Are you still awake?

Son: We’re home from the hospital.

Mother: I figured you were still at the hospital.

Son: We got back about a half hour ago.

Mother: How is Rhia adjusting to being in this world?

Son: She’s making faces, so she must be kind of awake.

Mother: Maybe you’ll luck out and have a baby who sleeps through the night.

Mother: The pics are absolutely adorable.

Mother: She looks like you at that age. Do you think she’s going to have brown eyes?

Son: I don’t know if her eyes will be brown.

Son: Hard to tell yet.

Son: They are gray right now.

Mother: I just want to hug her.

Mother: She’s kind of roly-poly–comes by it honestly. Hehehehe.

Mother: I’m looking at her pic now–ran some off the computer. I just want to reach and pull her out.

Son: Yes...she is cute, although she’s pooping as we speak.

Mother: Hehehehe. Babies do that.

Mother: Has your dad seen her yet?

Son: He came to the hospital last night...with Grandma and Grandpa.

Mother: I figured that there would be a trail of relatives–Beam me across the ocean, Scotty!

[Pause]
Mother: How is PJ holding up?

Mother: After all, she did all the hard work.

Mother: Though she looked pretty lively in later pics.

Mother: Good–while we’re all going goo-goo eyed over sweet Rhia, we don’t want to forget who did all the hard work.

Son: No pain medication for the birth process.

Mother: I’m impressed! I asked for every pain medication on the market. Coward, I!
[Long pause]
Son: Sorry, we changed her diaper; now PJ is feeding her.

Mother: She wasn’t in a hurry to greet this world, but it sounds as though she has embraced it fully.

Son: She poops, and then decides she’s starving, so she’s upset during the diaper change cause she wants to eat.

Mother: A robust, baby girl and a healthy appetite.
[Pause]
Mother: I’ll bet Amy and Jenn are excited–they sure looked happy in the pics.

Son: Yes, we stopped by their grandma’s house on the way home so that they could see her again.

Mother: The thing about babies–they seem to come with a lot of promise and potential. You and PJ will help her realize that. I have great faith in your abilities there.

Mother: Your grandmother was describing how thrilled you are, and what Rhia means to you. I’m glad that PJ’s ex-mother-in-law is so understanding.

Mother: That’s SO cool. It could have been otherwise.

Son: One look at her, and I was hooked.

Mother: Yes, I can see that–I think, though, that you were hooked the minute you found out you were going to be a daddy.

Mother: And you didn’t pass out at the birth....

Son: No, it was quite an experience.

Mother: Wow–back in the states, I’d watch those maternity ward shows on Lifetime–and it was something else.

Son: PJ and the doctor said I was good while she was in labor.

Mother: I can see that.

Mother: I was definitely there in spirit–I thought about you all day, even though we spent half the day chasing after our [residence] visa. Grrrrr.

Son: Rhia doesn’t seem to like eating for a long period of time...just a little bit at a time.

Mother: That’s normal–You’d drink one or two ounces, and then you’d stop, only to be hungry again in an hour or two–

Mother: –Babies need to contemplate–drink in the world. Everything’s so new and bright after the wet, warm darkness of the womb.

Mother: The sensory experience for newborns must be absolutely overwhelming.

Son: Yes, that one picture was really when she opened her eyes for the first time.

Son: She looked like she was trying to open her eyes, then she opened them.

Mother: Wow, I can only imagine how that must have been for her...

Mother: One of the pics I printed out was that first one with her eyes open.
[Pause]
Mother: I’m going to be an obnoxious grandma–everyone who comes through these doors MUST look at her pics.

Mother: I wanted to post a birth announcement on the door, but Jerry wouldn’t let me. I even printed her name in Cyrillic.

Mother: I’ll e-mail you her name in Cyrillic–it’s pretty.

Son: She is a cutie, though–

Son: –Like all the women in my house. How lucky am I?

Son: She makes a lot of little sounds, some of which sound like words–

Mother: All those wild women–hehehehe–

Mother: OOOOhhh, a smartie; she’ll be reading by next week.

Mother: We’ll have to send her to college at six months.

Mother: But she won’t be allowed to drive until her feet can reach the pedals.

Son: She needs something to do whilst soiling her diaper–reading will work nicely.

Son: She is related to us, after all.

Mother: She could be related to Jerry–ha.

Son: I’d better go, but we’ll have to chat soon.